Billie Eilish is a popular singer – songwriter from USA. She has a strong connect with younger audiences and is counted among the famous youth influencers today who have a massive fan following.

This puts Eilish on the World stage and gives her a platform from where her opinions and actions can be heard and aped.

This is perfect, as the young sensation has stated that she loves to express herself through fashion. Let’s take a look at how she does this.

What Is Her Signature Style?

When she debuted on the American stage, the signature Eilish look was vastly different from what it is today. The singer’s trademark look has been baggy t-shirts, sweatpants and oversized clothing. She took casual dressing to a whole new level and soon her ardent fans were seen aping the casul, relaxed look as well.

She has stated, during a number of interviews that she likes to keep things casual as this gives her the opportunity to be in the midst of stardom, yet covered under multiple layers of clothing.

Why She Wears What She Wears?

Billie Eilish courted stardom as a young teenager. This left her exposed and vulnerable to intrusive media coverage and over-speculation. Her choice of dressing had much to do with the fact that she wants to appear mysterious so as to not reveal everything about herself in one go. It is also her attempt to stubb out any opportunity of body shamming by trollers.

On the other hand, she is also vehemently opposed to the sexualization of female stars, hence her attempts to remain as casual as possible.

Wearing outfits that is vastly different from what everyone is wearing also helps her grab attention and intimidate people, which she has stated that she absolutely enjoys.

The Evolution Of Billie Eilish’s Style

Bilie Eilish’s style saw an amazing transformation when she posed for the cover of British Vogue magazine in the June issue. She dumped her signature look and took on a vintage aura with a tightly fitted corset dress that left her fans in awe of her hidden persona.

Her appearance at the 2021 MET Gala of 2021 made heads turn as well. She showed up in an Old Hollywood styled pastel peach ball gown that was heavily inspired by Marylin Monroe’s look in the 90s along with delicate references to Holiday Barbie that used to be her favourite playmate as a child. The look was complimented by subtle makeup that added eons of charm.

This really got tongues wagging and ever since Eilish has chosen to drop the armor of laid back dressing from time to time and appear in more formal outfits.

Why She Chose To Make The Transition?

At the MET Gala in 2021, when Bilie was asked about her fashion choice for the day, she stated that it felt like the right time for her to show up in a dress like that.

Her stylist for the event Dena Giannini spilled the beans later, stating that Eilish had always wanted to wear a ballgown and had even expressed interest in wearing something corseted due to her love for the old Holiday Barbie.

In her previous interviews, the singer has expressed over issues with body image. Infact, she has stated that she often wears clothes that are almost double her size because she doesn’t want to be judged by people who watch her on their screens.

It has been suggested by various reliable sources that Billie Eilish’s height might be a contributing factor to her body image issues, as she is rather short when compared to other stage artists.

It is highly likely that this fabulous artist has gained the right amount of confidence over the years and is now more comfortable with showing off the gorgeous body that she owns. Beauty is only skin deep and the young girl seems to have realised that and begun to develop a thicker skin to negative comments and criticisms of herself.

It has also been brought to light that Billie Eilish wanted to wear something similar to the MET Gala in 2020 that was cancelled due to the Coronavirus pandemic. She said she wanted it to be acid green, to match her dyed hair at that time. 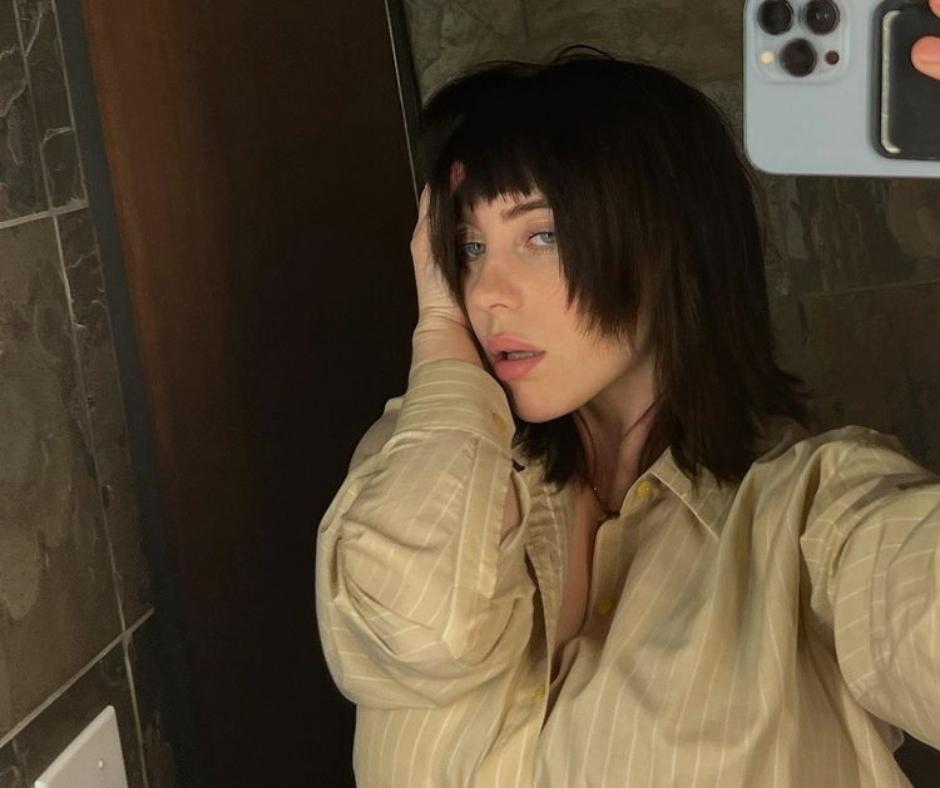 Did She Always Want This?

Often enough, she has been questioned, about what her individual style is actually like?

The performer has always chosen to stick to her guns, insisting that she dresses anyway she feels like. Infact, she has reveled that as a child, she loved to wear dresses.

The picture of her in her childhood room, wearing a sequined dress and tutu is proof that she once loved the girly image.

How She Responds To Those Who Troll Her

Billie Eilish has been a fierce defender of her choices ever since she debuted as a teenager. She has practically grown up in the limelight and has hence had a couple of brushes with trolls who attempt to discredit her, off and on.

She has stated that she believes in doing what makes her feel good. She has no wish to be owned and therefore is immune to opinions and criticisms against her.

She makes it clear that her choice of dressing and makeup is in no way reflective of her persona or her work. It is just something that she does on the basis of how she feels.

This might be the story of the young star Bilie Eilish, but it is definitely something that most young girls can relate to today. Criticism, body image issues and lack of empathy continue to discourage many from being themselves.